Here is my annual Xmas Poem. Apologies for he quality of the sound from my computer! Enjoy, and Happy Whatever!

The Escape Before Xmas (as told by Melania Trump)

T’was almost fucking Christmas and at the White House

I was living in hell because of my spouse

The loser still thinks he can steal the election

As much chance of that as he gets an erection

He went on Fox & Friends so that he could vent

While I banged a hot secret service agent

I had to get out, I was making a plan

To get myself rid of that fat rancid yam

And now off to Canada I plan to go

I’m going to get me some Justin Trudeau!

I was packing my bags full of expensive clothes

There was no way i could go on without those

Dresses from every famous designer

After I ditched that stupid fat whiner

In Hermes, Givenchys and Christian Diors

And Gucci and Lauren and Micheal Kors

When from the Rose Garden I heard a hubbub

I thought maybe Donald fell in a shrub

But there in the yard was a stupid red sled

With a bunch of gross critters I hoped were all dead

And a man with a beard who was fatter than Don

And you wouldn’t believe the suit he had on

He must shop at Walmart for this kind of crap

But it’s near fucking christmas so I knew real quick

This bastard must be that fat fuck St. Nick

He crashed through the door and fell on his rump

“Nice Suit” I told Santa “And who trims your beard?

It’ looks like Don’s hair, it’s so fucking weird”

“Wow”, he replied, as his nose gave a twitch

“I see why everyone says you’re a bitch!

You got by all your life because of your looks

And now you’re surrounded by nothing but crooks”

I wasn’t about to take shit from this guy

I called Secret Service but got no reply

“Shut up” I told the fat man on the floor

“You can’t talk to me like someone who’s poor

I’m the first lady, I have no master

I wear Jimmy Choo’s to a natural disaster”

The fat guy just scowled then gave me a wink

“I’m Santa, and you’re not as rich as you think

Don’s got less money than he has class

The scumbag’s  in debt up to his fat ass

With all the loans he will have to repay

You’ll end up back modeling lingerie

And I know how you really despise the orange man

I’ve seen you scowl when he goes for you hand

But he’d rather be banging his daughter Ivanka

Then you end up in a tennis pavilion!”

That was all I could take, it was time to Be Best

I said “Have you come here to just be a pest?

But you’ve been an asshole since you got here

If you have no gifts then off you should go

“Oh I’ve got a gift” Santa said with a smile

“It’s one that you’ve wanted for quite a while

You want to get rid of your cheating man

And get hold of his money while you still can”

“Oh Santa” I said, “that cannot be real

That gives you just enough money for life

When he says it’s time for a much younger wife”

Then reached in his pocket and pulled out a card

“Here’s the one gift to which you’ll say ‘Yup”

“It’s a lawyer who’ll get around your prenup!”

He threw it at me and then walked away

And stormed out the door and jumped in his sleigh

And Shouted “I don’t know now what you will do

But a Merry Fucking Christmas to you!”

Then said “Let’s roll” and reindeer did bound

And pulled the whole rig up off the ground

As it took off it made such a racket

I was reminded of my cheap Zara jacket

And I yelled out to Santa as off his sled flew

Posted by Glenn Locke, The Tall Thin Guy at 1:14 PM No comments:

The Man Who Turned Down the Sports Section! 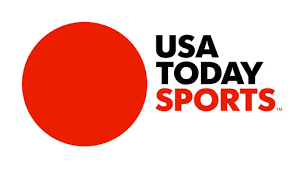 This is a story I liked to tell to my Economics students. See if you can guess why.

In the 1980’s I worked for a small company that marketed credit cards for department stores, back in the day when every city had a few regional stores.  My office was in a one story building located on the corner of Sheridan and Elmwood in Kenmore, NY, a detail only important to the Buffalonians reading this. I liked to leave the office for lunch, and several had options within walking distance. One of the choices was one of the many good Greek restaurants you could find in the Buffalo area.

In the 80’s I was in a fantasy baseball league, or Rotisserie league, as they were known in those days.  This was pre-internet, of course, and in those primitive times the best daily sports information was to be found in USA Today, making it required reading for me at lunch every day. (As a side note to this, because of this habit, several times I returned to the office to inform my boss that one of our customers had filed for bankruptcy!).  Most days I happily enjoyed my lunch with the colorful national paper, and newsprint covering my hands.

One day I walk into the Greek joint with the paper and take a seat at the counter a few seats away from an older man who smiles and says hello. He was eating alone, with no reading material,  a situation I still can’t imagine, so he was happy to chat about anything. We talked a bit about the usual stuff, then I got into the sports section. When I was done with it, I offered him the sports section, because that’s what guys do.

“Thanks, but I can’t read” he replied.

I tried not to let on how shocked I was. I guess I grew up in a very fortunate situation, because as far as I know that was the first person I had ever met who could not read. I didn’t think such a person existed in this country!  I could barely imagine it. I thought maybe he was kidding, but there was no indication that this was a joke.

My offer led to us talking a bit more. I have no recollection of how the conversation progressed to the point where he told me this:

“This morning I saw this guy in a wheelchair. I offered him a few bucks because I figured there was no way a guy like that could make a living.”

I pretty much let this drop at this point. But on the walk back to my office I thought about how I could easily do my job without functioning legs.  Hell, Stephen Hawking managed to succeed for years in his severely disabled state.

At this point you might be able to figure out why I would speak of this in an Econ class. One of the things that separates rich countries from poor is called “Human Capital”, meaning the education and skill level of the people.  The correlation between literacy rates and GDP/person is as close to perfect as you can get.  So, I would ask the class, who was more disabled, my friend who couldn’t read, or the man in the wheelchair, assuming that man was literate. In fact, can you even imagine a job you could do today that didn’t require some minimal level or reading? This story was almost too perfect for teaching this, and I’m not sure my students didn’t think I made it up. I wish I was so clever.

I wonder if my illiterate friend lived into the days of the internet and social media. If so, what a shame that his disability would have prevented him from enjoying the extreme pleasure of arguing with an idiot on social media!