NO, I Did Not Forget What A Paragraph Is!

For some reason Blogger has decided not to put the paragraph breaks that I used into my last two blog posts. Fucking great work guys! Sorry they look like shit and are hard to read.
Posted by Glenn Locke, The Tall Thin Guy at 3:47 PM No comments:

What I Learned From Our Little Fire 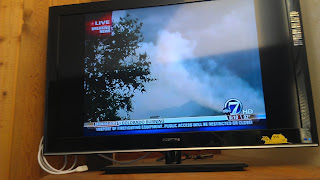 With the fire that started last Tuesday on the mountain near my house under control, thanks to the great efforts of a bunch of fire fighters, it is kind of amusing to look at the way it affected me and my neighbors when we got a "pre-evacuation", reverse 911 call at around 5:30 that evening.

I was working on the Banjo Billy Bus that day, and at about 3pm I saw a plume of smoke coming up over the mountains. It was clear that the fire was on the other side of the mountain, so I was not terribly concerned. By 5pm, when I again was where I could get a view of what was going on, I could see that my neighborhood on the southern edge of Boulder was now covered in smoke, enough smoke so that it was now impossible to tell exactly what was burning. Oh, and did I mention that it was an extremely hot and windy afternoon, the kind that is perfect for spreading a fire? As a matter of fact, those very same conditions caused the fire in Colorado Springs to blow completely out of control that afternoon and destroy about 350 homes.

As I finished my tour in downtown Boulder my phone rang. My step-brother Jim, who lives in Superior about 8 miles from me, was calling to offer help and a place to stay if I needed it. At this point all I know is that there is smoke over my house, and I had seen some neighbors heading home early while I was finishing my tour. "Do you know something I don't know?", I asked. He said he had heard there were pre-evac calls. So now I am in a hurry to get home, and the "pre-evac" call comes a few minutes after Jim's. The call says to prepare for possible evacuation. What the HELL does THAT mean?

It turns out it means a lot of different things to different people. To me if meant trying to figure out on the way home what I absolutely would be screwed if I lost. When I got home, adrenaline pumping, I grabbed a bunch of files from my file cabinet (financial stuff, stuff I'd written long ago, my REAL birth certificate) and threw the in a suitcase and put that in the car. Then I took pictures of everything in the house. Then, I had a sandwich while I tried to think of what else, other than some clothes, I had to take if I had to go. Sad thing, or maybe happy thing, is that I just don't have that much stuff I can't replace. Some of my neighbors, by the way, either grabbed all their stuff and left, or loaded their cars and had them parked, facing out, ready to go.

So, now it's about 7:30, I've done all I can think to do without a real evacuation order and......what? I thought I'd relax and watch some TV, like maybe CH 7 in Denver which had switched to full-time coverage of "Colorado Burning", dumping their regular programming. And what do I see trying to "relax"? A bit about the fire near my house, but nothing new. Mostly they are showing bunch of horrible video of the Waldo Canyon fire that now threatened to burn Colorado Springs and had caused evacuation of the Air Force Academy. And the tale of how that fire got whipped from small to disastrous in just minutes. Oh, and every ten minutes they cut to the weather guy, who to me is saying "It will never, ever, rain again in Colorado, high winds are coming, and we are all doomed". Thinking back on it, there is a good chance that is not what he actually said, but that's what I heard. But it was all very relaxing!

The other form of entertainment was standing outside on the street with my neighbors and staring up at the mountains, looking to see if there are any flames on this side of it, and cheering on the slurry bombers. There were. Near the top, but still, remember the weather report said wind and no rain. We were doomed!

And that's what I learned from the fire....that it is impossible to relax when you think that you may have to run from your home at any minute. Even though logic told me that the fire was on the other side of the mountain, and we had watched the slurry bombers laying fire retardant on our side of the mountain, and any fire would have to go through a lot of sprinkler systems to get to my house, I could not relax. I did fall asleep, mostly because my adrenaline rush finally wore off. But then I woke up in the middle of the night and looked out my window at the mountain, where I could see flames.

In the history of Colorado wildfires, this 300 acre fire is nothing. But it freaked us out here in Shanahan Ridge like our pants were on fire. Which makes me really feel for the people who live in areas where fire has actually attacked. Imagine the weeks of this some people have to live through. It also gave me even more respect for my friends Dave and Maggie, who run the murder mystery company I work for. When the area of the mountains west of Boulder was on fire in September of 2010, they not only kept their shit together, but they managed to grab all the stuff that the murder company would need to do the show we were scheduled for at the Boulderado that Friday. And they were sure their house was on fire when they left. When they called me on Wednesday after they had been evacuated to ask for my help in making copies of something for the script, I was shocked that the show would go on. Hearty folks, those mountain people.

Later this week I hope to write a bit more about how bad the fire threat is, why, and how unprepared we are for this. There has been a lot of good stuff written in the Denver Post about it recently. But now, with smoke no longer rising over the mountain, I think I'll relax.
Posted by Glenn Locke, The Tall Thin Guy at 3:42 PM 1 comment: