My Chilly Lesson about Electicity!

You would expect that when you travel on Dec. 27, the crazy shit you’ll encounter will be at an airport. Perhaps I should have known that trouble would await me at home when my flights from to to all arrived as close to on-time as I could hope, especially considering a storm in would screw up air travel all over the country that day.

Having trudged through a snowdrift up to my tall, thin knees to get to my car and clean it off, I stopped at the grocery store on the way home. I was starving and dead tired, having arisen at 4AM EST, or 12 hours earlier, and having had only a small sandwich and a bagel all day. I was psyched to enjoy the DiGiorno pizza I had bought, and lie on the couch and watch hockey until I fell asleep.

I shovel my way into my house and quickly go room to room turning on the electric heat….yes, I know electric heat sucks, but that was the fashion in the 70’s when my townhouse was built. I also flip on the oven to preheat for the pizza. After turning on the heat, I usually here a clicking sound, then some popping as the registers heat up, and the house warms up quickly. I didn’t notice any of that. I was too in a hurry to get to the bathroom and out of my snow covered jeans and shoes to notice. But minutes later, the registers had yet to heat up. My lights came on, the tv worked, but no heat.

After a half hour, I determined I had a problem. I check the circuit breaker box, but nothing is tripped. Hmmmmm.

Meanwhile, even though the oven had not heated to full temp, I had thrown my pizza in. It should take about 25 minutes.

By now I’ve decided my heat is broken, and call an electrician. While I wait, I notice that my pizza, which now should be cooked, is only half done and the oven has still not warmed up to the prescribed 400 degrees.

When Vince the electrician arrives, I tell him the symptoms: no heat, an oven that seems to be working on half power, lights and tv’s working, and no circuits tripped. “Wow, that’s interesting” he says. “Great” I think “I got the Dr. House of electricians, excited to work on an interesting case, probably not worried about what it costs.”.

Vince goes out to the circuit breaker box, and delivers this news: “I know what’s wrong, and I can’t fix it.” He says that the current is not coming in properly from the electric company, and that I am only getting about half the power I should. I had no idea that was possible, and apparently did any of my neighbors on the same circuits who also called electricians and got the same news (I found that out later….a bit of communication would have saved us $60 apiece!). In fact, while Vince was out at my breaker box, another electrician yelled out that he’d already notified Xcel (the electric co).

I call the electric company anyway, and they say it will be fixed within 4 hours. It’s about 4pm. By 6:30 I notice no activity, and it’s getting cold. I have the oven turned on at it’s lame half power…..oh, did I mention that my pizza was just turned to worthless goo by the half strength oven?....and the door wide open. It’s my only source of heat. I’m exhausted and want to sleep, but I’m afraid I’ll either freeze to death, or the heat will come on and the open oven will start a fire (don’t ask me how…I was tired and not thinking clearly). I call again, and point out that I have electric heat, so does the neighborhood, and the temp is dropping into single digits.

About 7:30 I see flashlights around the electric box across the street. I’m saved! But by 8 they are gone, and still no heat. About 9 I decide a cup of tea would be warming, and pop one in the microwave. 10 seconds later, all the lights go out. I look outside, and I see lights at other houses. I was sure I was screwed, that I had just blown what little power I had and would freeze and starve to death in the dark.

But wait, a blinking light can be seen in the other direction. I put on 3 coats and a touque and head outside, and there are 2 big Xcel trucks replacing a piece of equipment with a crane. By 9:30, the heat is on!

Do you think I can bill Xcel for the $60 I had to pay the electrician?

Posted by Glenn Locke, The Tall Thin Guy at 1:41 PM No comments:

After a day of air travel, I fully expect to read this story soon...

Washington, DC The CIA announced today that it will permanently abandon the practice of “waterboarding” (although it does not admit to ever using it). According to an unnamed source in the intelligence community, the CIA instead will subject high value terror suspects to a far more painful situation. Henceforth, these prisoners will be forced to ride for days in the center seat on United Airlines flights during major holiday seasons. “Let them spend a few days going from O'Hare to DFW to Dulles with no break. If that doesn't make the bastards sing, nothing will” the source growled.

Human Rights Watch and Amnesty International have both protested the new methods as inhumane. “This is the most blatant example of torture since Torquemada. Why, the movies alone on those flights are responsible for hundreds of suicides each year.” said an Amnesty International press release.

Posted by Glenn Locke, The Tall Thin Guy at 4:38 PM No comments: 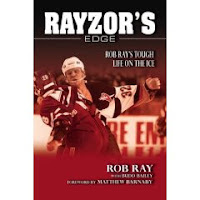 A few years ago, Budd Bailey told me he was working on a book with Rob Ray. I asked if that meant he was writing a book with Rob, or reading one to him. He promised to tell Mr. Ray, one of the NHL's all-time great "enforcers", of my question and where to find me.

Several years later, the book "Rayzor's Edge" is, or was, available. Actually, they sold out the first printing, despite failing to use the much more marketable title "Harry Potter Drops the Gloves". Hopefully, there will be a second, as I plan to read it on the plane to Buffalo this week, periodically shouting "Wow, what a great book!". Hopefully, that will prevent Mr. Ray from pulling my sweater over my head and pummeling me, and cause enough interest for a second printing.

By the way, this is Budd's second book, so he is now an author.

The Dead Weight Loss of Xmas

Confused about what do buy someone for xmas? Just give them money and this link

Rules of the xmas poem

Many of you have been reading my xmas poem for many years, but probably don't know the rules I set for myself in writing it. As I sit down to write this years atrocity, I remind myself I must:

1) Include a "Steve Miller" rhyme. The 70's rocker famously stretched the idea for rhyming with couplets like "Texas" and "facts is" and "abracadabra, I wanna reach out and grab ya". In tribute, I put a strained rhyme in every year. My favorites: Pterodactyl and tactful, and secular and nucular.

2) Use Yiddish. Hey, every since my friends in college taught me the correct pronunciation of "schwartza", I've been in love with the language. I consider this a tribute to my many Jewish friends who may feel left out at xmas. And if Santa is in the poem, he's the one who uses it!

3) Misspell something. Some folks love that feeling of superiority you get from pointing out other's mistakes, so I misspell a word, or leave other errors in there for them to point out. I consider this an xmas gift to my sister.

4) Don't offend anyone. Right, and I'm really tall and thin too!
Posted by Glenn Locke, The Tall Thin Guy at 8:26 AM 1 comment:

Made this and a few other videos with my friend Alan, who was running for Boulder City Council. Somehow, he lost!

Since I don't have much here yet, enjoy this hilarious video.

Posted by Glenn Locke, The Tall Thin Guy at 5:06 PM No comments:

Welcome to my Blog.

Don't know exactly what will end up here, but I figured it was an easier way to post my xmas card this year. Coming sooooooooooonnnnnn!!!!!!

Posted by Glenn Locke, The Tall Thin Guy at 3:16 PM No comments: