A Few Words About Social Security 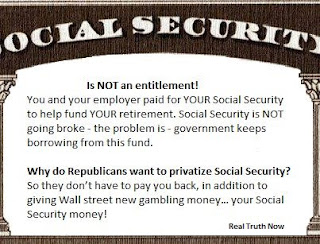 A few weeks ago my friend Maggie put one of those billboard thingys that you often see on Facebook on her page.  It had to do with Social Security, and it seemed to me to be very simplistic, so I said that in response, to which Maggie replied "Oh do explain, professor".  So, for Maggie and everyone else, here is a brief explanation of the facts and myths of Social Security, and my opinion on how me might "fix" it.

Myth #1 Social Security is a savings account set aside for you.  Social Security was designed as a "pay as you go" system, where money is taken from workers today and given to retired folks.  While you work you pay in, and when you reach 65 you can sit on your ass at the early bird special and collect.  Many are confused I think by the statement we receive every year.  So, to say it is "not an entitlement" is not really true.

Sorta Myth #2 There is a Social Security Trust Fund.  In the 1980's, when the folks in Congress were a bit less dim than they are today, they actually looked at the problem the Baby Boom generation was going to create for Social Security.  So, they increased the amount taken out of our checks, and until recently Social Security took in more than it paid out.  The problem is that the extra money, according to law, was loaned to the rest of the government.  Remember Al Gore saying "Lockbox" about 200 times during the 2000 election?  He was talking about some way to sequester that money so it would be there.  Now, the situation is that officially there is this trust fund, but it has all been loaned to the Federal Government, which means that it must be repaid by taxpayers.  So we owe ourselves a shitload of money.

Myth #3  Social Security is Broke.  This is technically not true. Under current rules it has enough money in that "trust fund" to pay benefits for about 20 years ( the actual number depends on whose projections you look at, and projections that far ahead tend to be inaccurate).  And it could pay lesser benefits for many years beyond that.  So when people say "Social Security won't be there when I retire" it is pretty much nonsense.  The problem is that we now have so much Federal debt, that the burden of paying it off along with paying social security and medicare in the future will mean the government won't be able to do anything else.  But it is not SS that is broke.  It will, though, under current rules, not be able to pay the benefits it now pays (adjusted for inflation) in the future unless something is done about it.


How I would "Fix" it...
I'll be honest: I haven't done the numbers, but I am pretty sure those 2 fixes would go a long way to allowing future retirees to receive the same benefits as the ones today do.

Now, anyone want to get into Medicare's problems?
Posted by Glenn Locke, The Tall Thin Guy at 6:11 PM 4 comments: